I’ve been a bit calmer the past day, then the first piece of news I read this morning is that a restriction of movement is ordered from Saturday. Just before summer time. I can’t believe this is happening to me. We have expected this decision, what’s more, we’ve been waiting for it. Many don’t understand, as they still only see the number of cases, and don’t see the reason for this decision while there are only 300 patients in the country. Sometimes I feel that people are only willing to understand and accept exciting things. They extract the word “restriction” and place it beside the number 300, no matter how many times we explain, that this number is probably a lot more, they do not understand. Probably because they can’t see it. I hope they never will.

When I graduated from high school, my favourite chapter was the Second World War. I read a lot about how the war changed the whole society. Factories were changed to manufacture weapons and ammunition, and gear for the soldiers fighting at the front. It’s astonishing to see the similarities with the present. This is a war too, you know, only against an invisible enemy. The epidemic affects everybody. Some feel anxious, others show physical symptoms, and some claim to be unaffected while the nervousness almost shakes them apart, because their lives changed within a second.

I’ve changed too. I’m generally pretty disorganised, and being around organised people always seemed tiresome to me, but recently I started enjoying their company. I like working with them, because they are extremely cautious about hygiene. I think this virus scare is the hardest on them. One of these days I worked with such a person. She is so terrified of the possibility of an infection, it suffices to say coronavirus in front of her, and she rushes to the first tap to disinfect her hands. Later, when everything was so clean that I could have eaten the received gift pizza off the floor, we looked at the map of the infections. I looked at the astonishing numbers and the earth turning redder and redder. She was looking for opportunity. She started zooming in on the map and looked for civilised parts of the world, where the number of cases is still low. We ended up looking and the northernmost corner of Norway, where, I guess, the temperature doesn’t exceed 18°C even in the summer. She pointed at the map and gloriously announced: “This is it, that’s where I’ll move: 16. Hagenbyevegen str. Tromsø, Norway. I told her that everything is way to clean and neat there, but she found that very agreeable. I would like to go to Canada someday, or Amazonia, but I guess the best would be, If it all would just pass and I wouldn’t have to organise a one-hour long hand disinfection for a bloody sandwich, which is almost inedible because of all the disinfectant odour in the air.

The new lifestyle is slowly creeping into the hospital too. Everybody is preparing, everybody switched themselves to a new mode of functioning. We constantly discuss the official emails and analyse the new rules about our work. The management communicates with us daily, not only our direct supervisors, the director too. They are constantly present, even in the hardest situations.

We got new gear and new patients. There are more and more patients every day. We spend more and more time in protective suits, and we find it less and less strange. It’s hard to diagnose this infection because it can be hidden. It’s not like a heart attack with typical symptoms, EKG pattern and blood work. This jerk of a virus is always just suspicious. And more and more asphyxiated patients come to the hospital feeling as if a heavy weight has been placed on their chest, and they have fever and a cough. Most of them are elderly: nice, honest grannies and grandpas who deserve better. They are alone, as visiting is forbidden, so we are the only ones they can count on. We send all patients to the isolated ward worrying about them and hoping for their recovery.

The diary of a triage nurse 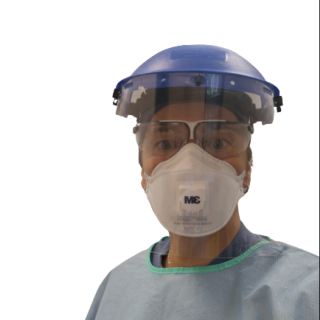